The name ‘Lagos’ meaning ‘Lakes’ in Portuguese is said to have been given by a Portuguese explorer, Rui de Sequeira when he visited the area in 1472

That said…..Lagos is also the smallest state in Nigeria occupying an area of just 385.9 mi² 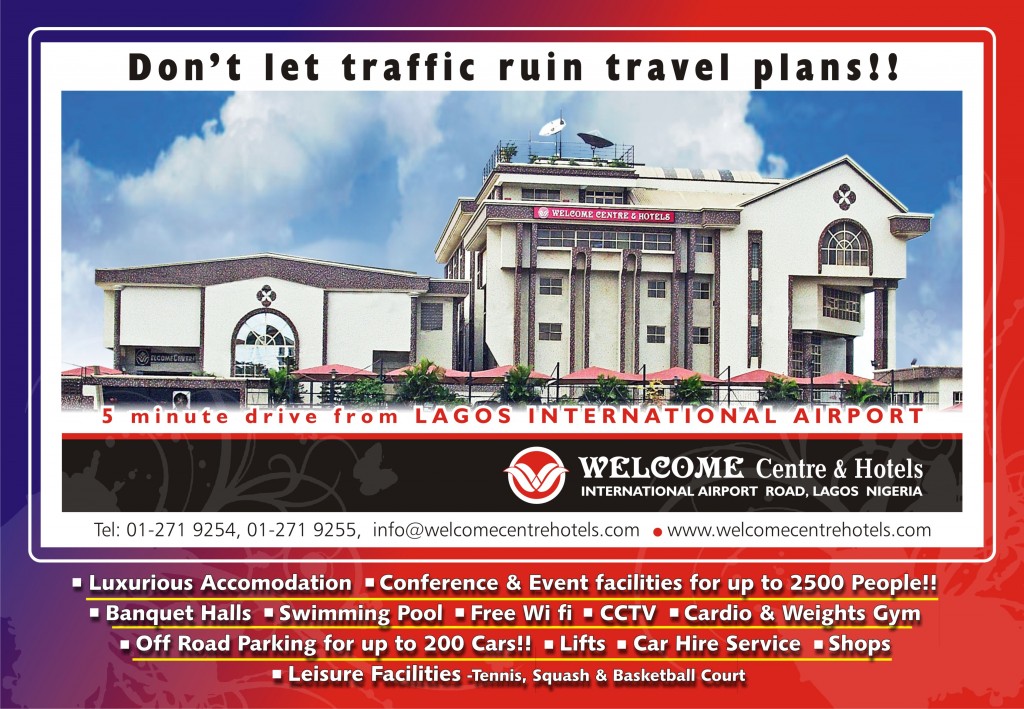 At 520 ft and 32 stories high, The Nigerian External Communications (NECOM) building in Marina, Lagos – formerly called the ‘Nitel Tower’ is the tallest building in Nigeria and the entire West Africa Region. 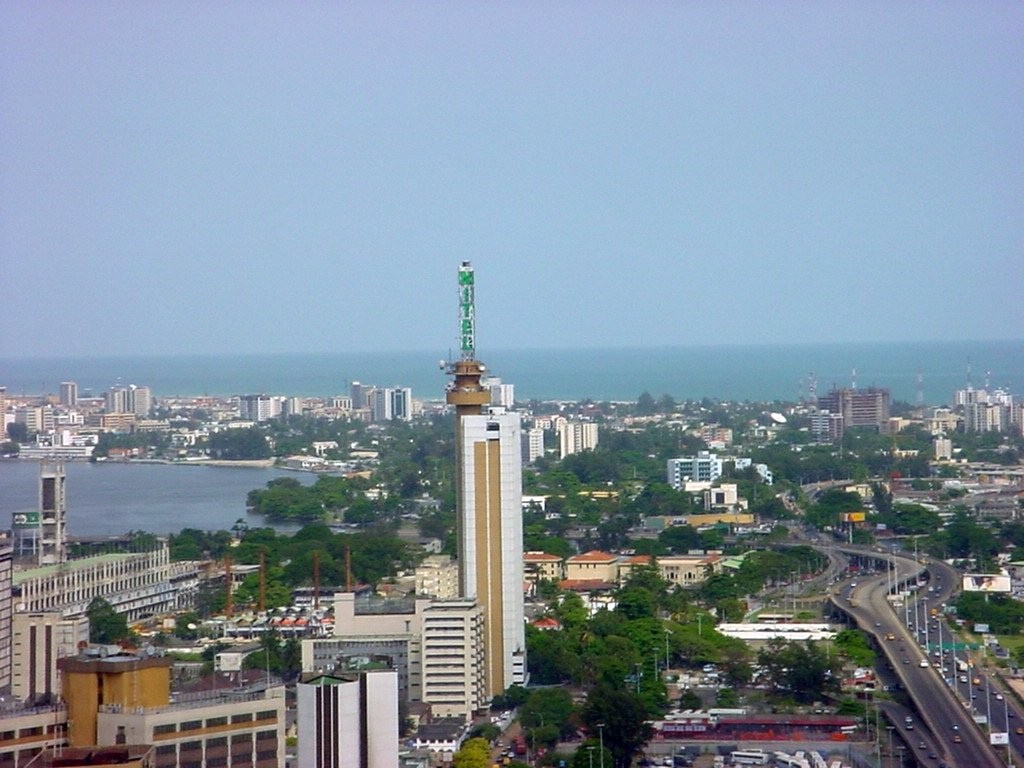 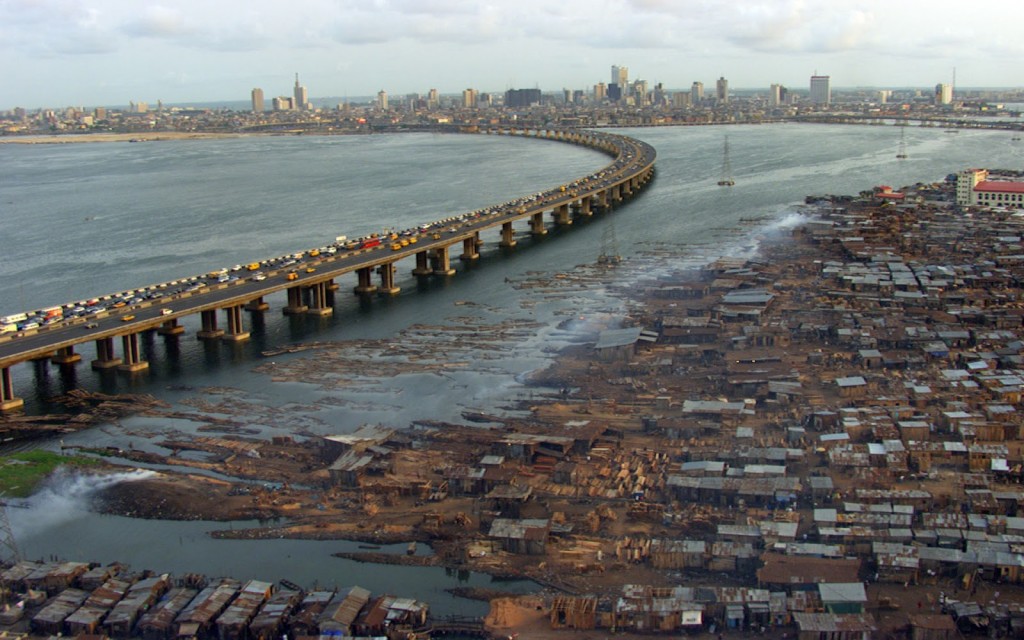 The Third Mainland Bridge on a somewhat overcast day

Seaside town of Badagry is home to the oldest story building in Nigeria. The foundation of the building was laid in 1842, although it was built by the missionaries in 1845. The building remain a monument today and many people come to see it every day.

From 1914 to 1991, Lagos was the seat of power of Nigeria and served as both a political and economic capital. The plan for the movement of the capital from Lagos to Abuja was initiated by General Murtala Mohammed but it was not actualized until 1991 during the regime of President Ibrahim Badamasi Babangida.

The first modern commercial bank to operate in Nigeria was the African Banking Corporation in 1892. Based in South Africa, it was invited by Elder Dempster & Co (an expatriate shipping firm operating in Lagos) to operate in Nigeria. Unfortunately, a trade recession hit Lagos that year and Elder Dempster & Co was forced to take over the running of the bank. They ran the bank as a private bank until the end of the year when it became known as the Bank of British West Africa ‘BBWA’ (now known as First Bank of Nigeria). They registered in London with an authorized capital of £100,000 and opened their first proper branch in Lagos in 1894. When British Bank of West Africa (now First Bank) opened a branch in Kano in 1929, Alhassan Dantata (Dangote’s Grandfather) opened an account depositing 20 camel-loads of silver coins. Groundnut pyramids were the invention of Alhaji Alhassan Dantata to stack bags before export

All the territory in Lagos is low-lying, the highest point on Lagos Island being only 22 feet (7 metres) above sea level. Compared to the rest of the country, the highest peak in Nigeria is 2419 meters and is located in Taraba (i.e in the Southern sector of the Nigerian Gashaka Gumti National Park on the border of Cameroon) and is called Chappal Waddi.

The Lagos Airport (now know as the Murtala Muhammed International Airport) has an IATA code ‘LOS’ was originally built during the 2nd World War. The International terminal was modeled on Amsterdam Airport Schiphol and was opened in 1979.

Lagos is recognised as a World City or Global City by GaWC “Globalization and World Cities Research Network” which is an important node in the global economic system. (https://en.wikipedia.org/wiki/Globalization_and_World_Cities_Research_Network) 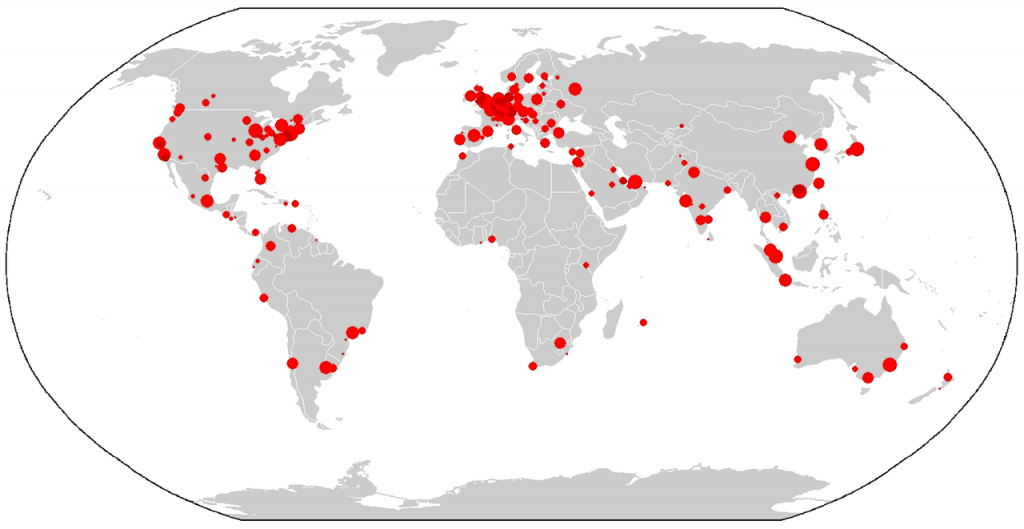 Lagos is ranked as a Beta City on the GaWC scale on par with other cities such as Houston, Cleveland, Seattle, Abu Dhabi, Lyon,Calgary, Denver, Tunis, Nairobi. Cities such as London, New York, Hong Kong, Paris, Tokyo etc are ranked as Alpha Cities. Alpha Cities are vastly more integrated with the global economy than all other cities and fill advanced service niches for the global economy. Beta Level Cities are that link moderate economic regions into the world economy. Further down are Gamma level cities such as Jeddah, Baltimore, Cologne, Osaka, Ankara. Further down are Sufficiency level cities like Strasbourg, San Antonio, Sacramento, Providence, Pretoria, Abuja, Ottawa, etc

Lagos in 2012 was ranked by the Economist Intelligence Unit (The Economist Group) at 119th out of a possible 5,000 cities in the world for its demonstrated ability to attract capital, businesses, talent and visitors.

Lagos has two twin or sister cities which are Atlanta, Georgia and Gary, Indiana. Twin cities are a form of legal and social agreement between two cities to promote cultural and commercial ties. The modern concept of town twinning, conceived in 1947, was intended to foster friendship and understanding between different cultures and to encourage trade and tourism by forming strategic international business links.

Lagos city with a population of over 21m people has been voted the 30th city in the world for quality of life. The result of the poll conducted by consultancy firm PwC conducted in December 2015.

May 27, 1967. A state called Lagos was carved out of the old Western Region. “Of all the 12 states created in 1967 by General Yakubu Gowon, only Lagos State has remained indivisible,” explained the Lagos State Commissioner for Information and Strategy, Steve Ayorinde. “Nothing has touched it; no state has been carved out of Lagos. It has never been severed. Its map has remained the same as it was 50 years ago

In 1973, the Federal Government of Nigeria considered officially changing the name of “Lagos” to “Eko”. Regarding “Lagos” as a colonial name.

Jaja Wachucku was the first person to refer to Lagos as a “no-man’s land” in 1947, provoking a national controversy. He was a favoured lecturer at the Glover Memorial Hall, Lagos. There, in one of his lectures, Wachuku provoked national controversy when he declared Lagos a “no-man’s land” – meaning that it was an all-Nigerian city – wherein all Nigerians were entitled to equal rights (https://en.wikipedia.org/wiki/Jaja_Wachuku). Jaja Wachuku is reputed to have owned the biggest one-man library in West Africa. Balewa sometimes referred to him as “Most Bookish Minister.

Yoruba which is the most widely spoken language is Lagos is also spoken as a ritual language by the Santeria cult in Caribbean and South-Central America.

The area known as Makoro town in Lagos was first a swamp, later sand-filled by the colonial government and served as the first bridge to the Island.

Juju, Dashiki, Yam and Okra are words in the English dictionary that originated from ethnic groups located in present Nigeria

Do you know that West Africa’s largest wood market is in Lagos, Nigeria. The Makoko-Oko Baba Wood Market. If you’ve crossed the Third Mainland bridge, you may have seen geometrically arranged logs of wood floating on the water and wondered why they are there, who they belong to and how they stay afloat. The logs belong to different groups of people, each marked differently for identification. They are sectioned into rafts by wires and timber dogs and are sitting on the water because they’re waiting to be sold. The female logs float and the male, sink. According to the wood merchants, the market has been around since the 1930s. I can tell you authoritatively that this business [in Oko Baba] employs more than 10,000 persons (YouTube – https://www.youtube.com/watch?v=o6ucxDXuLWQ&feature=youtu.be

In 2016 Nigeria has about 770 naira-billionaires whose wealth is valued above $10 million (N1.98 billion) each.  There are about 450 of the 770 billionaires who reside in Lagos, while another 50 live in Abuja. Besides the Egyptian and South African capitals, Cairo and Johannesburg, Lagos is the city with the largest number of billionaires in Africa

When it comes to the world stage, Nigeria’s wealth queues behind many nations from around the world, with only five billionaires in dollars on the world rich list for 2016. While Lagos boasts of 122 UHNWIs (ultra-high-net-worth individuals), New York comes in at the top of the list with 5,600, while London comes in second with 4,905. Moscow, Russian capital city, comes in third with 3,457 UHNWIs. Other top cities on the list include Mexico City, Osaka, Seoul, Singapore, Oslo, Madrid, Taipei, Abu Dhabi, Geneva, Los Angeles, Chicago, Stockholm (http://www.younewsng.com/2016/03/03/450-billionaires-lives-in-lagos-50-in-abuja-770-in-nigeria/)

Lagos is a gateway to other West African countries as it has a land border with Benin Republic through which other countries are accessible.

CMS grammar school which is the oldest secondary school in Nigeria and is located in Lagos State. The school was founded on 6 June 1859 by the Church Missionary Society. For decades it was the main source of African clergymen and administrators in the Lagos Colony

For long until the eighteenth century, the Lagos creek system provided the only outlet to sea-borne trade on the African West Coast. By 1907, construction work on moles for the Àpápá harbor had begun using rock brought in by rail from Abéòkúta. Its extension to the northern city of Kano in 1912 assured Lagos’ long-term role as important entrêpot to Nigeria. Lagos ports handle for four-fifths of Nigeria’s imports and 70 percent of exports. The Àpápá port is estimated to be the fifth busiest in West Africa.

The elevation of Lagos is generally described as being at or below sea level with areas already being threatened by the sea.

One of Lagos’ aliases is ‘eko, ile ogbon’ which means ‘Lagos, the fountain of common sense’ aka be streetwise.

Another popular nickname for Lagos is ‘Las Gidi’ means represent the hustling nature of Lagosians!

In the late 1970s, according to survey estimates, about 53 percent of all workers depended on the bus to get to their workplaces; one-fifth or 20 percent commuted by private automobile; another 20 percent walked to work while less than one percent traveled to work by train or water transport. The number of private cars has increased over time; in 1960, 8,800 licensed cars existed in the city; between 1970 and 1974, over 42,000 cars were registered. In 1985, nearly 20,000 minibuses, 6,000 midi-buses, and 30,000 taxis were estimated to run in metropolitan Lagos.

Lagos resilience means it is probably the only state that is able to generate enough internal fiscal and commercial revenue to sustain its operations.

In fact, if Lagos was a country, it would be the 4th Largest economy in Sub Saharan Africa.

Lagos was settled at various times by hunters and fishermen from the Àwórì sub-nationality. Originally based in Iseri on the Ògùn River about 20 miles from the island, the initial wave of settlers led by Arómiré (“the one that becomes personable at the sight of a river”), established a presence in Ìddó and Èbúté Métta. Arómiré also grew vegetables, especially pepper, on a site where Iga Ìdúngànràn, the palace or official residence of the Oba of Lagos now stands. Iga Ìdúngànràn is an Àwórì term meaning house on pepper farm. The palace is thus not only an important symbol of the historical traditions of Lagos; its name also helps keep alive the site’s association with vegetable farming by Arómiré, the city’s first settler.

The iconic ‘three white cap chief’ (aro meta) statues in Lagos is meant to welcome all into Lagos. However according to folklore, they also represent 3 things Lagosians must remember 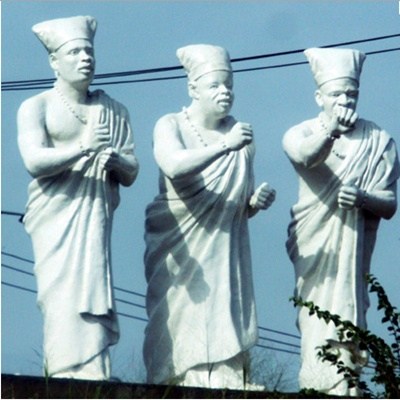 Lagos was the major center for slave trade until 1851.

Lagos is the only state with the iconic yellow buses (danfo,molue) and taxis. 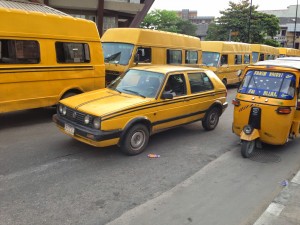 Tinubu Square is where the amalgamation of the Northern and Southern Protectorate to form Nigeria in 1914 took place while the 1960 independence ceremony took place at Tafawa Balewa Square.

Lagos home to the longest canopy walk in Africa. The longest one in the world is said to be in Kedah, Malaysia in the Sedim river recreational park. It is 950 meters long. There are two in Nigeria, the one at Obudu mountain resort, Cross river and the longest one in Africa (401m) at Lekki conservation center, Lagos

From the mid-nineteenth century, freed Yorùbá slaves started returning to Lagos in waves first from Brazil and then from Sierra Leone. In 1847, Oba Kòsókó of Lagos sent his close friend and adviser Chief Oshòdì Tápà to South America to invite slaves with Yorùbá ancestry to return home. The trip yielded results in 1851 when 130 expatriates arrived in Lagos. By 1861 when Lagos formally became a British colony, the number of returnees had risen to about 3,000. The Brazilian expatriates brought with them skills in masonry, carpentry, and tailoring, a strong Catholic faith, and extensive Portuguese cultural traits. 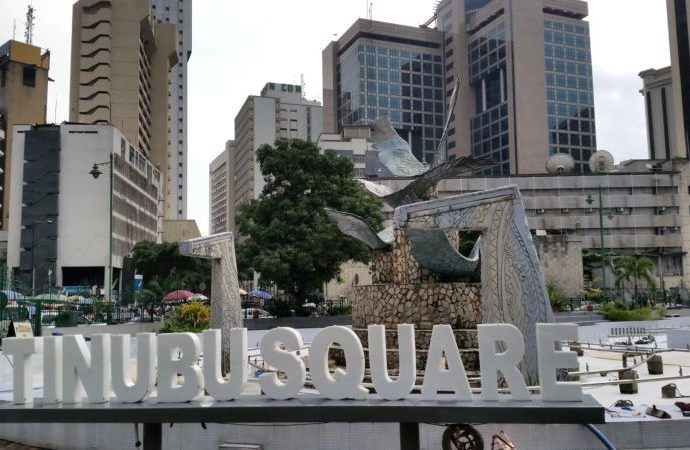 Lagos Island (Isale Eko) was home to the Brazilian quarter of Lagos where most slave returnees settled. They lived in Marina or Broad street.

It is believed that the Eyo festival can only be held in Lagos Island. 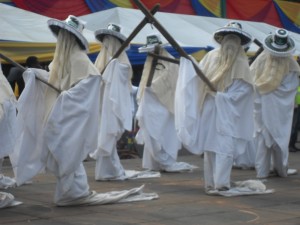 Lagos initially emerged as a port city which originated on a collection of islands that are separated by creeks. These islands are Lagos Island, Eti Osa, Apapa & Amuwo-Odofin.